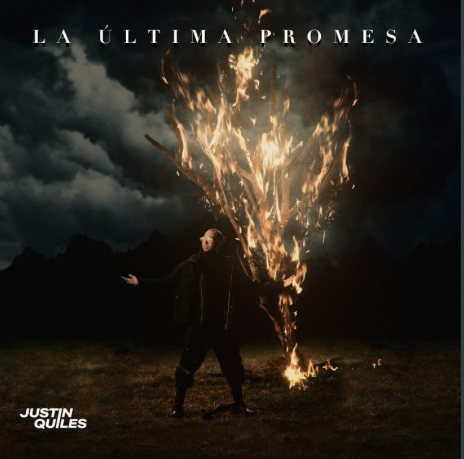 Justin Quiles* officially presents his third studio album via Warner Music Latina called La Ultima Promesa (The Last Promise)
Following La Realidad (2017) and La Promesa (2019), the Puerto Rican singer-songwriter says La Ultima Promesa. “This album is incredible. I go back to the sound that characterized me on my first album and I think my fans are going to like that a lot.” Justin
Home to 14 tracks — including previously released singles “Pam,” “Jeans,” and “Loco,” all of which entered Billboard’s Hot Latin Songs chart — the album includes collaborations with Daddy Yankee, El Alfa, Rauw Alejandro, and Maluma, to name a few.
On the album cover, Quiles is wearing all black and spreading his arms wide open. In the background, dark mountains, stormy clouds, and tree bark on fire. “It represents all the litmus tests that life has given me and we are still here on fire,” he elaborates.
For Quiles’ La Ultima Promesa also marks the closing of a musical cycle and the beginning of another one. “I have songs ready for my next album, which I’d like to drop in six months. I’m ready. I come with different formulas. Those who know me, know I like to do different things.”

Author Jochy VasquezPosted on August 18, 2021August 18, 2021
Leading a new wave of Latin music for over a decade, notorious producer and artist Tainy has been the brains and key component behind...
Read More

Author latinmixx100Posted on April 13, 2022April 13, 2022
Multiplica Mixtape is a trap movement featuring artists from all over the world. a concept of family, sister/brotherhood, unity, and prosperity with a common...
Read More